1 in 3 women* in Utah will experience some form of sexual violence in her lifetime. This shocking statistic brings to light the severity in which our community is facing violence and assault- two issues that are rarely talked about. But the reality is, there are most likely many more women experiencing sexual assault but their voices are not heard. An issue that we commonly see at Safe Harbor is within the justice system regarding sexual assaults. As you can see in the figure below, out of every 1000 cases of sexual assault, only 230 survivors** will report the case which leaves 77% of cases unreported. We wanted to look into these statistics and share some reasons why survivors choose not to report incidents of abuse and violence. 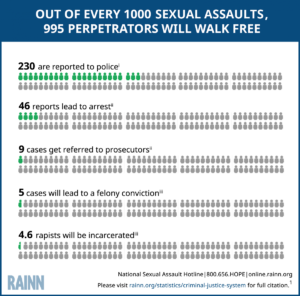 There are both internal and external factors contributing to a survivor’s desire to not report, and both are important in understanding the full picture of what a survivor faces after an assault.

First and foremost it is important to address rape myths and the acceptance of perceived norms of what rape entails. Some rape myths that can influence a survivor’s desire to report include the idea that only certain types of women are raped, rapists tend to be strangers, men cannot control their sexual urges, and women were “asking for it” based on what they were wearing, if they were drinking, and where they were located at the time of the incident. These myths place the blame onto the survivor rather than looking at the root cause of the behavior of the perpetrator and their actions. Dispelling rape myths is an important process of prevention and intervention. You can find more information on rape myths here.

Because of these rape myths, a survivor may not even recognize an assault occurred because the situation did not fit the standard of a particular rape. A survivor may also choose not to report because they did not sustain any injuries and therefore do not believe the incident was violent enough to report. Additionally, they may feel the rape will not be justified if there was previous intimacy that occurred between them and the perpetrator. To be clear, any incident of intimacy should be consensual regardless of whether or not it was consensual in the past. Yes before does not mean yes now (this includes marital rape). Because of the low prosecution rates, survivors often do not want to report if there is any question as to whether or not the incident occurred. Often going through the criminal justice system is a form of re-victimization, meaning the survivor will have to relive the trauma and perhaps come face to face with their perpetrator.

These external factors which contribute to underreporting are all issues that we as a community can do something about. We can educate ourselves and dispel rape myths, have hard conversations about rape culture and the prevalence in which violence occurs within our community.

The internal factors which drive a survivor away from reporting include (but not limited to) shame, denial, fear of consequences, low self-esteem, rationalizing, feelings of hopelessness, previous assault,  and fear of safety.

Survivors deal with an abundance of emotional turmoil after the incident, and shame is one of the most prevalent of those emotions. Because an assault typically makes a survivor feel dehumanized and as if they were treated like an object, shame is a natural reaction to those feelings. This shame often leads survivors to blame themselves rather than their perpetrators and take the responsibility for the assault.

Another key component to underreporting is a survivor’s fear of their own safety. Oftentimes survivors are afraid that their perpetrator might retaliate, and become even more violent if the survivor reports the incident. Even if a survivor creates a safety plan and takes all the necessary precautions to protect themself, this may not be enough for the survivor to not be afraid of their perpetrator.

In an ideal world, all assaults would be reported and perpetrators would see the justice that is deserved, but unfortunately, that is not the world we live in. With that being said, it is important to know why survivors choose not to report in order to show compassion, understanding, and empathy throughout their healing process.

Below is a breakdown of the reasons why survivors choose not to report, which comes from the Department of Justice.

Sexual assault is happening at rates much higher than we realize and the chances are if someone says they have been assaulted, they are telling the truth. Believe them.

*Although men experience sexual violence as well, for the purpose of this blog and based on the research conducted, we will be focusing on female-identifying women and their experience with sexual assault.

**We will be using the term survivor to refer to those who have experienced sexual assault and violence. We recognize everyone who experiences these incidents are on different paths of healing and at different times.